The Museum is free and is open 10-4 Mon-Sat during the winter season and 7-7 daily during peak season (Check the website before you visit). The Museum is located at 479 Main Avenue, Durango, CO 81301.

The 12,000 square foot museum was created in 1998 in what was once the roundhouse. It includes railway memorabilia, such as the two locomotives above. As they say on their website:

The Durango & Silverton Railroad is proud to share the fascinated history of railroading, transportation, and mining with people from around the world. 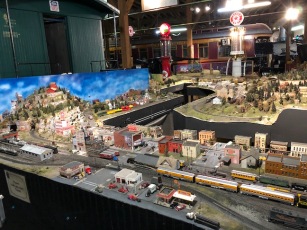 The Museum also has many other items on display. They claim to be frequently updating the exhibits.

Outside there is some rolling stock that the Museum maintains. These are in addition to those used in the train that travels between Durango and Silverson.

There is also an enclosed shop for restoration and maintenance.

We enjoyed the time we spent at the Museum and will probably visit it again the next time we are in Durango. If you have an interest in trains, particularly of the steam variety, then you will enjoy a stop at the Museum.

(See my other Food related posts) – When my wife and I were on our recent road trip we stopped at the Lone Spur Cafe for a late breakfast when visiting Durango. The Lone Spur we visited is located at 619 Main Avenue, Durango, CO 81301. There are two other locations in Flagstaff and Prescott Arizona.

Keeping with the western theme, the restaurant has a very rustic appearance, the service though was very good. 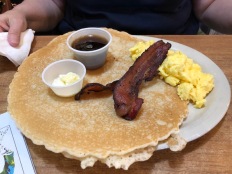 As I said, we both ordered breakfast and we were very pleased with our meals. Even though it was late in the morning the restaurant was crowded, This confirmed for me that many found the food there good. Looking at TripAdvisor this opinion for the Lone Spur is supported by a 4.5/5 rating. Likewise, it has a 4.5/5 rating on  Yelp.

The Lone Spur is open seven days a week 6:30AM to 2:30 PM, and from 5:00PM until 9:00PM on Fridays and Saturdays. They offer an extensive breakfast menu and a selection of soups, salads, burgers, sandwiches, and specialty items for lunch.

If we are in Durango again, we will definitely be revisiting the Lone Spur Cafe. It is a location I would recommend if you are visiting Durango.

(See my other 2019 Road Trip and Location posts) – Since we were driving through northern Arizona, we wanted to take the time and visit the Four Corners Monument. It is the only location in the US where four states intersect. As it turned out we barely made it there in time before it closed for the day. Fortunately, we arrived just before it closed and we had a chance to look around.

The large plaza with the actual point where the corners of the four states Arizona, New Mexico, Utah, and Colorado meet was almost empty. I think if we had arrived earlier and been there on a weekend or in the summer when schools were out, it would have much more crowded. As it turned out we could take photos easily and without intrusions by others. We even were able to get a photo of us standing at the intersection point.

There is a great deal of booth space around the periphery of the plaza, but none were occupied when we were there. We want to visit on a future trip when more is going on at the Monument. As you can see from the flags in the photo above, the wind was blowing strongly while we were there.

In 1912, when the dust settled and the final lines were drawn, a cement pad was built on-site to officially mark the spot where the states came together. The cement pad has since been upgraded to a brass and granite designation marking the “four corners.”

Located within the Colorado Plateau, the site is near many parks and preserves renowned for their natural beauty, including Monument Valley and Canyon de Chelly National Monument.

I wouldn’t make a trip just to visit Four Corners, but if you are close to that part of the US it is a nice side trip. There is a charge of $10 per individual or $20 per vehicle to enter the Monument.

(See my other 2019 Road Trip and Location-related posts) – On our road trip, we had to spend some time in St. George, Utah on some business before we continued on our vacation. We took the opportunity when leaving St. George to head back East through Zion National Park. This made my second visit to the part. 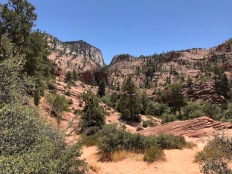 The park was extremely crowded when we were there. We never could find a parking spot at the main visitor center, so we did not get out to walk around. 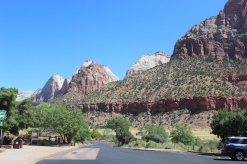 We were able to pull over at a few different spots to enjoy the scenery and take photos.

I would like to go back sometime when it was less crowded (if there is such a time) and when it is a little cooler to walk some of the trails.

Taking the route through Zion put us a couple of hours behind for the day, but the scenery was well worth it.

These photos are just a small sample of what I was able to capture. They don’t do justice to actually being there.

(see my other Location related posts) – While on our 2019 Road Trip my wife and I took the time to drive up to the Sunset Crater Volcano National Monument. This is not in Flagstaff, Arizona but is only about 15 miles or 30 minutes north of the city (take U.S. 89 north for 12 miles (19km), turn right on the Sunset Crater – Wupatki Loop road and continue 2 miles (3km) to the visitor center). 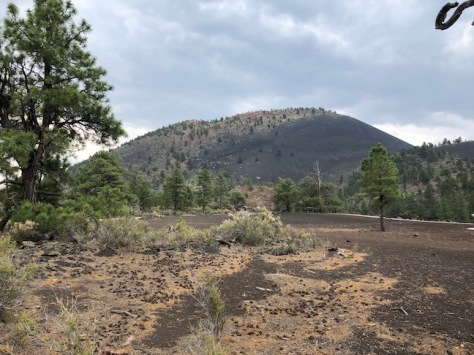 Sunset Crater is about 900 years old, yet it is still the youngest volcano on the Colorado Plateau. The cinder cone (shown above) of the crater now stands about 1000 feet above what was once just meadows and forest. As you can see in the photo above there is still a great deal of cinder from the volcano strewn about. 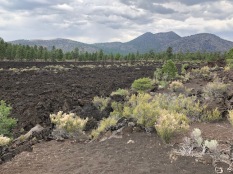 As you can see as well, there is still evidence of lava flow that resulted from the volcano.

While there has been some regrowth in the past 900 years, the soil itself resists in many places. The parking lot at the base of the crater offers a few hiking paths. Some paved, but others wander over the rough terrain offering a closer view of the crater and the existing flora.

The day we visited the crater access to the park was free (National Parks has a few free days per year). Normally there is a $25 per vehicle charge. This was not as impressive as the Meteor Crater, but still worth the time to visit.

See my other Location & Food posts

While they operate several different locations (13 at the time I write this post), I have only visited the Henderson, NV site at 9560 S. Eastern Ave. Henderson, NV 89123. 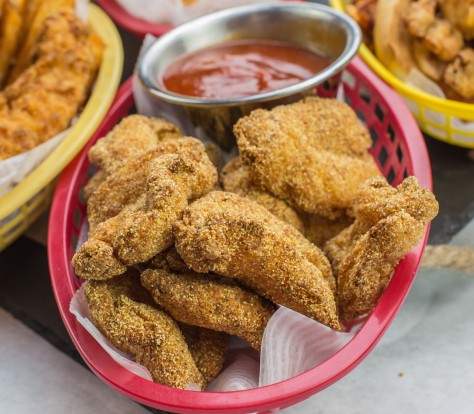 As I mentioned before, I like their fried shrimp and their cajun fries. 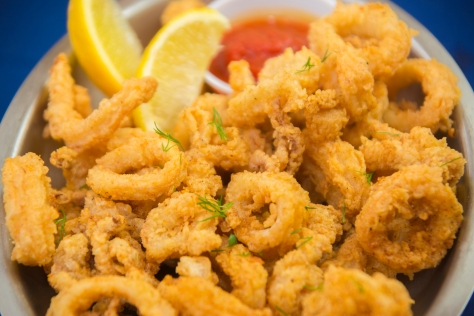 My wife and her brother also tried the regular Calamari and enjoyed that as an appetizer.

We have all enjoyed being a Hot n Juicy customer. If you like seafood, particularly spicy seafood, you will want to give Hot n Juicy a try.

While we were driving on our 2019 Road Trip to Henderson, NV to visit family we passed by Meteor Crater Natural Landmark just east of Flagstaff, AZ (Meteor Crater Enterprises, Inc., Interstate 40, Exit 233, Winslow, AZ 86047 USA). We were in no hurry so we took the time to visit. As you can see from the aerial photo above, the crater is quite large.

The meteorite that created the crater 50,000 years ago is estimated to have weighed 300,000 tons and was traveling at a speed of 26,000 miles per hour when it hit the Earth. The meteorite exploded with the force of 2 ½ million tons of TNT. In the photo above you can see the largest found fragment of the mostly iron meteorite. 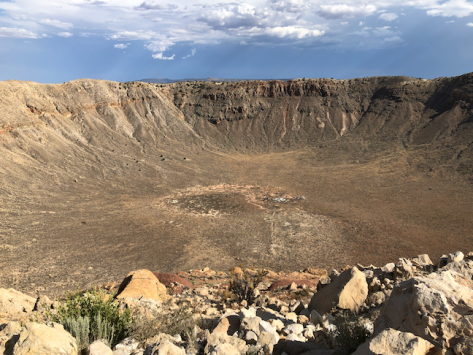 To give you some perspective of the size, they have placed a 6′ astronaut figure (because the astronauts headed to the Moon trained here) and a 4′ x 6′ US flag at the base of the crater. They are placed inside the red circle in the photo above. 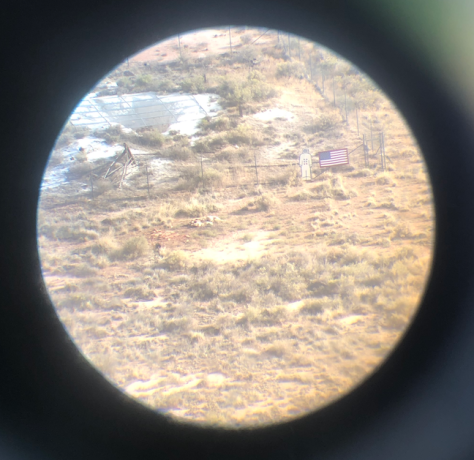 I had to use one of the prepositioned telescopes at the visitor center observation deck to see them. With a little effort, I captured a photo with my iPhone. That does put the distance in perspective!

We were also on a short guided (man in yellow) tour that went about a quarter of a mile west along the north rim of the crater.