(See my other trailer-related posts) – A new series is scheduled to begin on Apple TV+ 22 October 2021. The name of the series is Invasion and it is a science fiction story about Earth being invaded. The story is told through the experiences of different people all around the world. The official synopsis per Apple TV+ is: Earth is visited by an alien species that threatens humanity’s existence. Events unfold in real time through the eyes of five ordinary people across the globe as they struggle to make sense of the chaos unraveling around them.

The trailer looks intriguing. I have been a science fiction fan since I was in Middle School. I look forward to watching the series when it begins in October. This first season includes 10 episodes.

(See my other trailer posts) – I have been a fantasy fan for many years. As many have, I read and enjoyed J. R. R Tolkien’s Hobbit books.

One of the other fantasy authors I have enjoyed is Robert Jordan. Jordan is a pen name for James Oliver Rigney Jr. While he wrote other works, he is best known for his Wheel of Time series. The series comprises 14 novels, plus a prequel.

Jordan completed the first 11 books. Fantasy and science fiction author Brandon Sanderson wrote the remainder. Jordan discovered that he was terminally ill in 2006. Jordan and his wife arranged for Sanderson to complete the series to their outline. Sanderson did a wonderful job completing the series. He is another author I have read and enjoyed.

I finished the series a few years ago and really enjoyed it. I was pleased when I heard that a TV series was being developed around the novels. The first episode is scheduled to appear on Amazon Prime on Friday, 19 November 2021.

(See my other trailer posts) – I have been a science fiction fan since I was in Jr. High. One of the authors I read a lot of is Isaac Asimov. Among his works are the seven novels of his “Foundation” series.

These were published over decades from 1950 through 1993. The premise of the story (per Wikipedia) is:

in the waning days of a future Galactic Empire, the mathematician Hari Seldon spends his life developing a theory of psychohistory, a new and effective mathematical sociology. Using statistical laws of mass action, it can predict the future of large populations. Seldon foresees the imminent fall of the Empire, which encompasses the entire Milky Way, and a Dark Age lasting 30,000 years before a second empire arises.

I read the first five of these novel years ago. Apple TV is bringing the series to their network beginning 24 September 2021. I can only hope that their version of Foundation is as good as the novels were. I am looking forward to it! 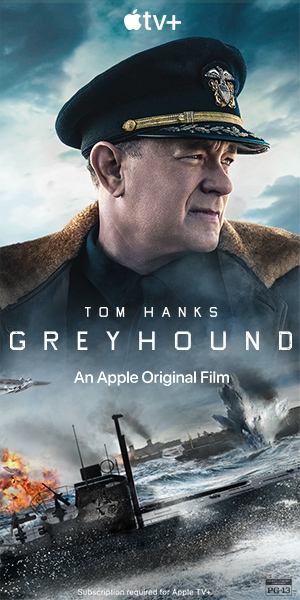 There have not been many movies made in recent years about the WWII era in history. One of the most recent is “Greyhound”. While the movie was intended to be theatrically released, because of COVID-19 it ended up being released on Apple TV+. My wife and I watched it a few weeks ago and found it very enjoyable.

The synopsis (per IMDB): Several months after the U.S. entry into World War II, an inexperienced U.S. Navy commander must lead an Allied convoy being stalked by a German submarine wolf pack.

While this story may seem at first to be contrived and pure fiction, it is based on actual events in WWII. For instance (from my Timeline page) are these incidents:

If you have access to Apple TV+ I recommend this movie. It is great to see Tom Hanks on screen again and this is a very good depiction of what convoys faces during WWII. It ranked a 7.0/10.0 on IMDB.

This looks like it will be good. “Greyhound” will be in theaters on June 12 of this year. The synopsis per IMDB:

During World War II, a US Navy skipper must lead an Allied convoy being stalked by Nazi U-boat wolf packs.

The screenplay for the film was written by Tom Hanks. The story is based upon the many convoys that were taking desperately needed supplies from the United States to England.

This Trailer for the program “For All Mankind” is out and it introduces us to a very different look at the ‘space race’ of the 1960s. In this science-fiction tale, the Russians were the first on the Moon and the ‘space race’ never ended. This is a program that will make me want to subscribe to Apple TV+.

There are 10 episodes in the first season and the second season has already been approved by Apple.

I will be looking forward to seeing Disney’s “Jungle Cruise” when it comes out on July 24, 2020. I rode the Jungle Cruise ride for the first time at Disneyland back in the late ’50s. The ride can now be enjoyed at four of the Disney parks: Disneyland, Magic Kingdom, Tokyo Disneyland, and Hong Kong Disneyland. It was one of the top-level rides when Disneyland opened in 1955. The synopsis per IMDB:

Based on Disneyland’s theme park ride where a small riverboat takes a group of travelers through a jungle filled with dangerous animals and reptiles, but with a supernatural element.

This looks like it will be another fun movie with Dwayne Johnson.

(See my other WWII related posts) – I recently watched the movie “Mission of Honor” (originally named Hurricane) on Netflix. This is a modern WWII era film that gives a fictionalized version of the RAF 303 squadron in the Battle of Brittain. The 01:47:00 film was released in March of 2019. The synopsis from IMDB:

The exploits of 303 Squadron RAF during the Battle of Britain. The squadron consisted of Polish pilots, many of whom were veterans of the air battles involved in Germany’s invasion of Poland.

This is more romance set against the backdrop of WWII than it is a war movie. It was enjoyable enough, but not what I would consider an outstanding film. That also seems the consensus on IMDB as there it is only rated 5.9/10. It did receive and 83% on Rotten Tomatoes. While most of the dialog was in English, there was a substantial portion in Polish and some in German. Those were supplemented with English subtitles.

(See my other Star Wars and Trailers posts) –  The first ‘teaser’ for the upcoming “Star Wars IX – The Rise of Skywalker” has been released. The only synopsis thus far on IMDB:

The final chapter of the saga from a galaxy far, far away.

The film will be released this December. I’m looking forward to it.

Science Fiction – Trailers – I watched the movie “Extinction” about a month ago on Netflix. It has been out now for almost a year. The synopsis per IMDB:

A father has a recurring dream of losing his family. His nightmare turns into reality when the planet is invaded by a force bent on destruction. Fighting for their lives, he comes to realize an unknown strength to keep them safe from harm.

I enjoyed this film and think it is a good Science Fiction story, though it only earned a 5.8/10 rating on IMDB. I think it deserves a better rating than that. I like the plot twist at the end of the film.