(See my other posts related to Libraries) – I liked this review of the Detroit Public Library. I like to visit these old libraries myself.

Over this past week I celebrated my.. shhh… 33rd birthday. I love birthdays just as much now as when I was younger. To celebrate Luke and I had a date day in Detroit where we went to the historic Eastern Market, the Detroit Institute of Art, and last but not least the the stunning Main Branch of the Detroit Public Library. Outside, Michigan was experiencing a toasty, summery 83°F. However, due to the air conditioning being broken within in the library, it was a humid, glistening 88°F. Having first found photos of this delightful library when I was compiling my 150 most beautiful libraries in the world I was excited to finally see it in person, however upon walking into the library it was not at all what I was anticipated with wall to wall marble. That being said, upon making our way to the second floor we found…

Libraries – I like visiting libraries when I travel. I thought that this was a great introduction to Grande Bibliothèque in Montreal, Canada. I have added this library to my list of places to visit.

While in Montreal for the day (stay tuned for next week’s post highlighting our 24 hours in Montreal), I couldn’t resist looking up Montreal’s most popular library. I was most definitely on a library high after the stunning Library of Parliament that we’ve visited the day before in Ottawa and was eager to explore another library. After perusing the list of city libraries, the Grande Bibliothèque stood apart as it was the most visited library in North America in 2011.  It was a bitterly cold Sunday morning that we were exploring Old Montreal, with a stiff wind making the chill that much more penetrating. With the weather now given context, marry someone who will readily walk into that biting wind for approximately thirty minutes to visit a library you have been reading about only that day. Luke and I were both frozen through by the time we stepped into the warm entry…

Libraries – I like seeing blog posts about libraries and have made a few myself. I enjoyed seeing this one of the Stockholm Public Library and wanted to share it.

The post contains a little more travel info than just the library itself, but it is worth seeing another library I might want to add to my list of places to visit.

Our final day in Stockholm and just enough time before heading back to the airport to fit in a visit to the Stockholm Public Library in Odenplan. I love visiting libraries wherever I travel and what a delightful one this was. The library, which was designed by Gunnar Asplund and completed in 1928, is one of the city’s most famous buildings with its geometrically designed neo-classical architecture and is listed as being one of the world’s most beautiful libraries. 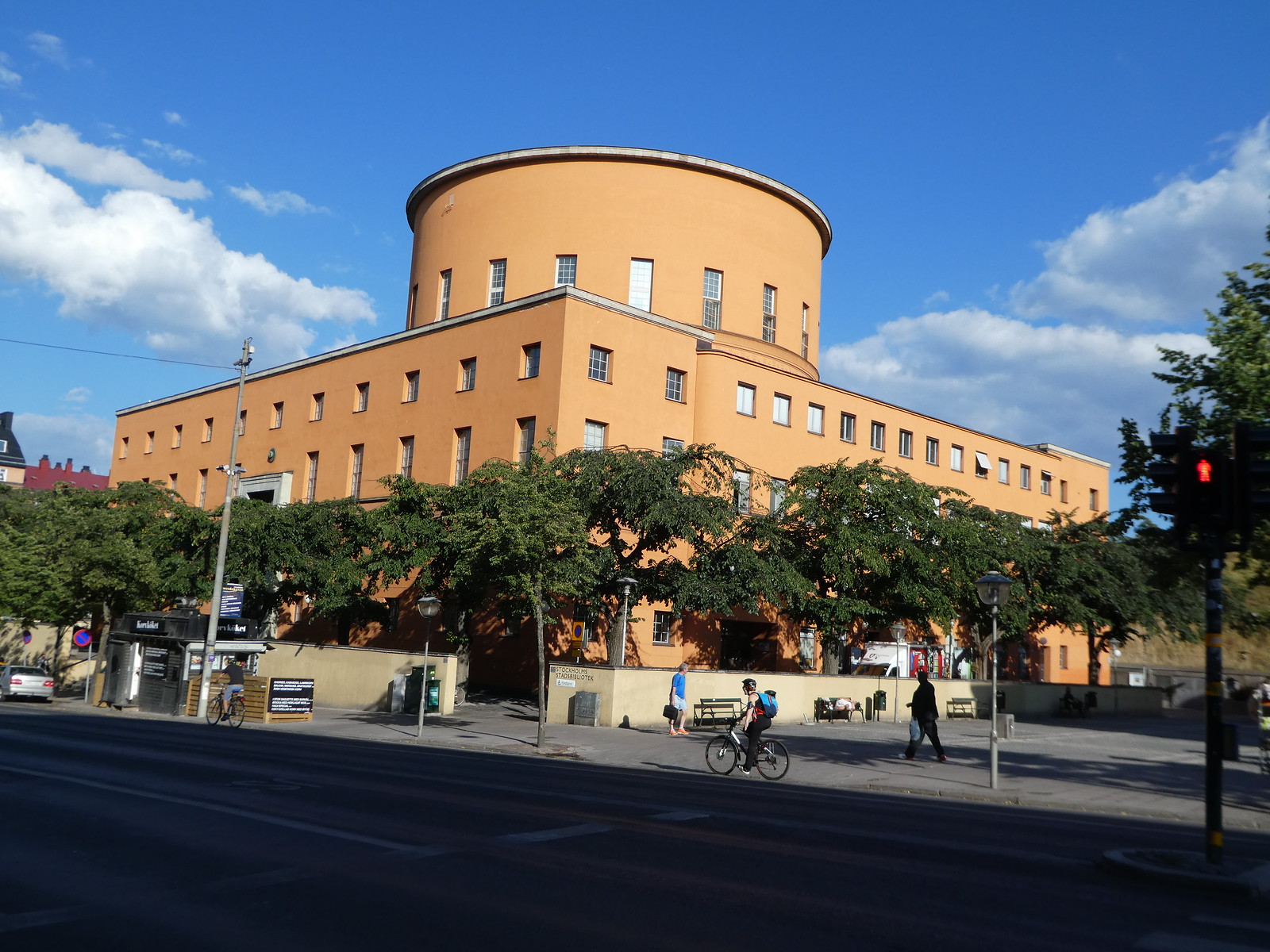 Stepping through the Egyptian style doorway and climbing the central staircase, we were able to get our first glimpse into the central rotunda of the library. The rotunda is a circular book hall and is an absolutely stunning temple for book lovers like me. It contains a total of 40,000 books on three levels and retains its original mahogany furniture and leather chairs. 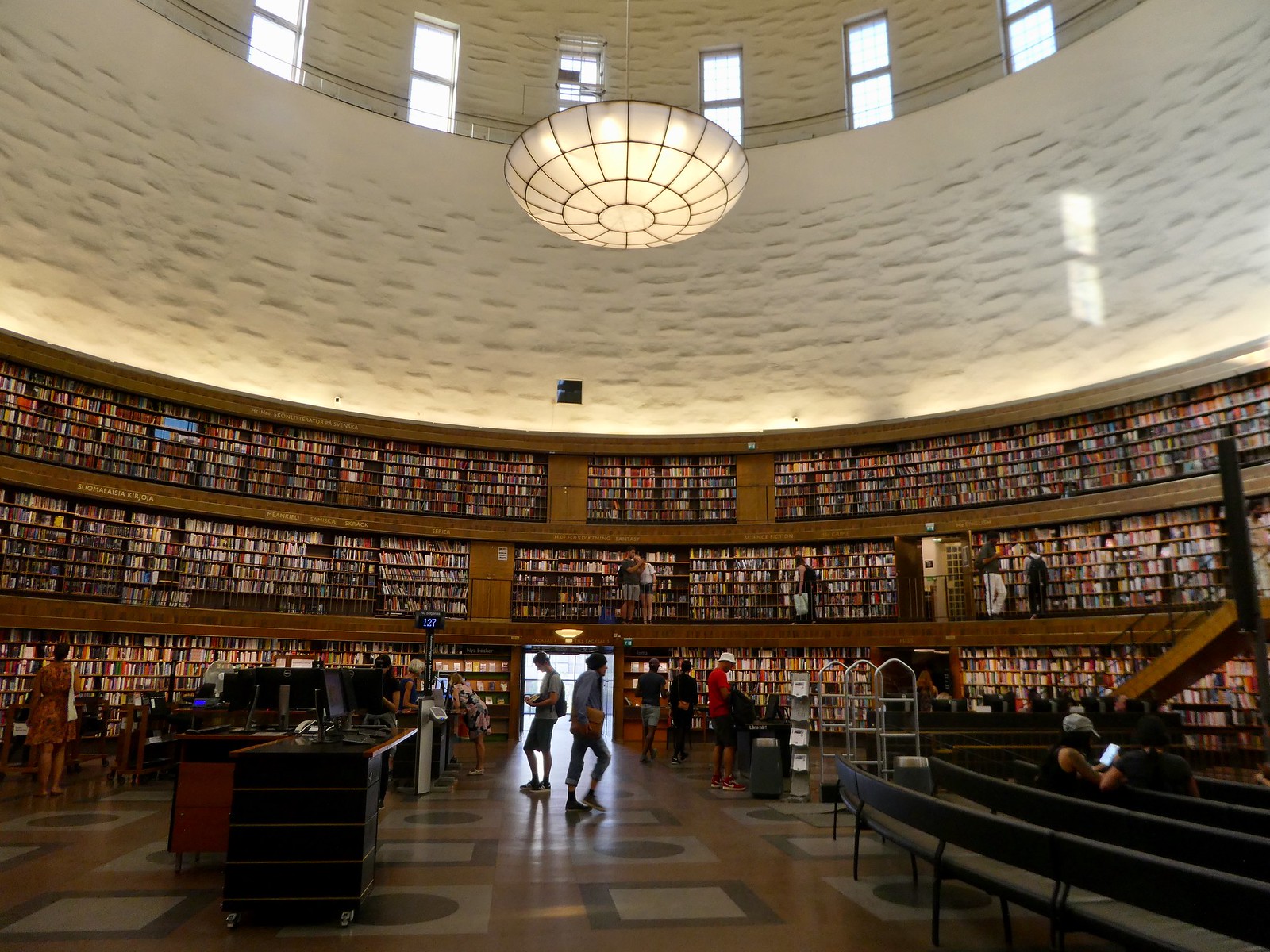 Libraries – I always like visiting unusual libraries. When I saw this post covering the Library of Parliament library in Ottawa, Ontario, Canada I had to share it.

Needless to say, it is now on my list of libraries to visit one day.

Over this past weekend Luke and I took a three day weekend up to Ottawa and Montreal. As several of our trips had fallen through recently with wildfires closing Yosemite, canceling our Half Dome hike and a new job changing our American southwest journey I was bursting at the seams to go on a new adventure. Knowing we had a three day weekend, we decided to fit in a trip to the Canadian capital, especially as their Library of Parliament had been on my library bucket list for a quite a while now.  To access the Library of Parliament the public is able to go on free guided tours throughout the Centre Block, where not only will you get to glimpse this remarkable library but also be taken on a tour the center of Canadian government such as the Commons and Senate rooms.  Prior to our trip I’d read that…

Books – Libraries – I have posted about libraries I have visited before. I thought that this Blog post by “The Critiquing Chemist” showed off a very interesting building. While it is a specialty library (the law library), it is none the less a beautiful and picturesque structure.

The past month has been a whirlwind of exciting life updates as my brother got engaged and I made an exciting career change. Yesterday was actually my first day at my new job working in the laboratories at the State of Michigan! With a few days off last week in between jobs I decided to check a library off my bucket list that is relatively just down the road from where I live.  One of my best friends happened to be in town for the week from Arizona so we coordinated breakfast in Ann Arbor before walking to the Law Library.  I hadn’t expected the absolute nightmare parking would turn out to be but Megan and I eventually both found spots.  Based on glowing recommendations we enjoyed the raisin bread and coffee at Angelo’s, which was well worth the half hour wait in the cold. After stuffing ourselves Megan and…

Reading – This is a good list. I like to visit bookstores and libraries when I travel. Fortunately, I have had the opportunity to visit three of those listed: the Library of Congress, Shakespeare and Company, and The Strand. They were all impressive.

I would add to that list these as well:

So many locations around the world for book lovers to visit. My list of places I want to visit grows constantly.

Happy Tuesday my lovelies, Following my recent dedication to post more often, here is another Tuesday book meme for you all. Top 10 Tuesday a meme created by The Broke & the Bookish, but which is now hosted by Jana from That Artsy Reader Girl featuring a different bookish related theme each week. This week’s theme is Bookstores or libraries I have always wanted to visit! I am so excited about this one because going to a bookstore is probably one of my favourite things to do! I just can’t help but feel at home there and there are so many amazing ones in the world I still haven’t visited (seriously debating planning a trip to visit a bunch of famous bookstores).

*All descriptions are taken from wikipedia

1. The Library of Congress

If you have seen other posts of mine you will know that I like book stores and libraries. While in New York we took time to visit the New York Public Library. Specifically we visited Stephen A. Schwarzman Building (476 Fifth Avenue (42nd St and Fifth Ave)
New York, NY) shown above. Included in that shot is one of the two famous marble lions at the front of the building.

The Stephen A. Schwarzman Building is renowned for the extraordinary comprehensiveness of its historical collections as well as its commitment to providing free and equal access to its resources and facilities. It houses some 15 million items, among them priceless medieval manuscripts, ancient Japanese scrolls, contemporary novels and poetry, as well as baseball cards, dime novels, and comic books.

The ways in which the resources of the Stephen A. Schwarzman Building have been used are as diverse as the collections themselves:

– During World War II, Allied military intelligence used the Map Division for research on the coastlines of countries in the theater of combat.

– Television and print journalists first consulted the Slavic and Baltic Division when covering the changing political structure of the former Soviet Union.

– Authors of countless literary and nonfiction books cite the Library as a major resource in their work.

– Countless individuals have reconstructed family histories and located long-lost relatives through records in the Milstein Division of U.S. History, Local History, and Genealogy.

This is the largest and grandest library that my wife and I have visited so far. We were able to take a short time to sit in the reading room shown above an just read. We could easily have spent hours there.

If you like books and are in New York, I recommend that you take some time and visit the Schwarzman Library building.