Globe created by the Multimodal Acoustic Trap Display developed at the University of Sussex. Credit: Eimontas

I thought that this was something of interest. The article “From sci-fi to science lab: Holograms you can ‘feel’” describes a holographic system called Multimodal Acoustic Trap Display (MATD) which “can simultaneously deliver visual, auditory and tactile content”. This uses “acoustophoresis” to move and manipulate particles to create the hologram.

This work was written up in the article “A volumetric display for visual, tactile and audio presentation using acoustic trapping” that appeared on11/13/19 in Nature. This could bring some very interesting interactive displays in the future.

(See my other Robot related posts) – Earlier this week Uber announced that their Frisco Station helipad site would be the test site for Uber Elevate. Uber Elevate is their “flying car” division. The plan, per their website, is to develop:

shared air transportation—planned for 2023—between suburbs and cities, and ultimately within cities. We’re working with our Elevate Network partners to launch fleets of small, electric VTOL (vertical takeoff and landing) aircraft in Dallas, Los Angeles, and our first international market in Melbourne.

The Frisco Station site is located on the Dallas North Tollway and is being built larger than the typical helicopter landing pad. Uber is estimating a 7 minute average flight time from the facility to their terminal at DFW.

(See my other Space and Propulsion related posts) – I came across the article “Earth To Mars In 100 Days? The Power Of Nuclear Rockets” today and wanted to share it.

The idea of a nuclear rocket engine was developed in the 1960s for NASA. The research was led by Werner von Braun and successfully tested in Nevada.

What is a nuclear thermal rocket?

A conventional chemical rocket carries combustible chemicals which are ignited, then the resulting gases flow out of a nozzle propelling the vehicle. In a nuclear rocket, a small marble size chunk of Uranium fuel undergoes fission. This energy released heats hydrogen to very high temperatures (nearly 2500 C). The hydrogen is then expelled from the vehicle in a nozzle like on chemical rockets. The difference is that nuclear propulsion is two to three times as efficient.  Tests were carried out starting in 1955 that have proven that this technique will work. Testing was discontinued in 1973.

Where are we Now?

The original design required highly-enriched uranium. Current designs will most likely rely on low-enriched uranium.  This would make nuclear propulsion systems safer to work with. On May 22, 2019, the US Congress approved $125 million to fund new nuclear thermal propulsion development.

Another alternative being researched is using fusion instead of fission for propulsion. The Princeton Plasma Physics Laboratory is working on what they call the Direct Fusion Drive. Applied Fusion Systems is also at work on a fusion alternative.

Whether it is fission in the short term or fusion in the long term, the prospects for nuclear-powered rockets looks very positive. Read the full article for more details. 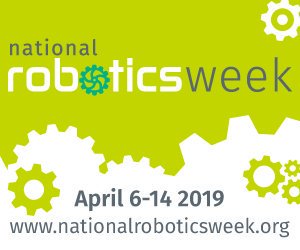 Robots – This week, actually it started yesterday, celebrates robotics in the US. Per the National Robotics Week website:

National Robotics Week (RoboWeek) is a series of grassroots events and activities during the month of April aimed at increasing public awareness of the strength and importance of the U.S. robotics industry and of the tremendous social and cultural impact that robotics will have on the future. Activities come in all shapes and sizes from a robot block party, university open house, or a robotics competition. The mission of RoboWeek is simple — to inspire students in STEM-related fields and to share the excitement of robotics with audiences of all ages. Celebrate RoboWeek by hosting an event in your community, sponsoring or attending a local event, or spreading the word on social media.

National Robotics Week was first celebrated in 2010 after university and industry leaders appealed to the Congressional Caucus on Robotics to create a “national roadmap” for robotics technology. On March 9, 2010, the U.S. House of Representatives passed resolution H.Res. 1055, officially designating the second full week in April as National Robotics Week.

Below is a good history of Pi video. It will help you appreciate Pi a little more.

I came across the article “Learning how (and how not) to learn” which gave me some new insights into learning.

So what are some of their findings?

This is information all can apply, particularly engineers and others in the tech fields who are constantly having to update their knowledge. This is also something to share with High School and College students you know.

Tech Tips – First, what is 5G? 5G stands for “Fifth Generation” and is the next generation of wireless communications. Most of our devices are operating on 4G at the moment. 5G will give us peak transmission speeds up to 20 Gb per second, far faster than what 4G provides. 5G will also provide reduced latency, energy savings, lower cost, higher system capacity, and massive device connectivity.

The first phase of 5G specifications in Release-15 is not scheduled to be released until April 2019, with the second phase (Release-16) scheduled for completion by April 2020. Even then it has to be approved by the International Telecommunication Union (ITU). While most carriers have test networks in place in selected locations, the worldwide commercial launch of 5G is not expected until 2020.

So how are AT&T customers seeing a “5GE” icon on their phones now? This is best attributed to some marketing efforts by AT&T. Their “5GE” is simply an enhanced version of the 4G LTE network you have been using. Users with 5GE capable phones may see faster performance in some areas. iPhone users must have iOS 12.2 or newer installed to be 5GE capable. For Android users, they need Android Pie or newer.

Only the iPhone XS and XS Max, as well any Android phone that uses 4×4 MIMO (multiple-input and multiple-output radio), have the hardware compatible with 5GE. No iPhones currently on the market are 5G compatible. 5G requires different hardware.

Propulsion – I have been watching the stories in the media on the EM Drive for a while now. If you are new to this, the EM Drive is a resonant cavity thruster. In simple terms, it is an electrically powered thruster that requires no fuel. It was proposed by Roger Shawyer in 2001. Most consider the EM Drive to be impossible as it defies currently known physics.

Previous tests of an EM Drive prototype by NASA showed some success. The EM Drive was subjected to more strict testing by a team at the Dresden University of Technology in Germany led by Martin Tajmar. They presented their results at the Aeronautics and Astronautics Association of France’s Space Propulsion conference on May 16, 2018. Their tests are not supportive of the claims made for the EM Drive.

The results presented by Tajmar is reviewed in the video above by Scott Manley. Tajmar and his team had not totally given up on the EM Drive at the time of their report. They plan further testing, but the prospect of this being the solution to propulsion hoped for is dim.

Robots – Flying cars have been around in science fiction for many years. Now though we are on the verge of having them become part of our everyday lives. That said, don’t expect your next call for Lyft or Uber to be answered by a flying autonomous taxi.

The Boeing autonomous passenger air vehicle (PAV) shown above is just a prototype and so far it has only demonstrated the ability to take off, hover, and land. This is a 30-foot model is all electric and is designed to have a 50-mile range. Boeing NeXt is also working on a larger fully autonomous, electric cargo plane that will be able to carry up to 500 pounds.

Beyond the technical hurdles of building a flying car are the many regulatory issues that stand in their way. Needless to say, it will be a few years before we see these in our sky.

Boeing is not the only company working on flying cars. Among those interested in this market are Aston Martin, Rolls-Royce, Uber, and Toyota. These flying cars are intended to offer a transportation solution that will be able to carry passengers across urban centers where ground transportation would be slow or impractical. 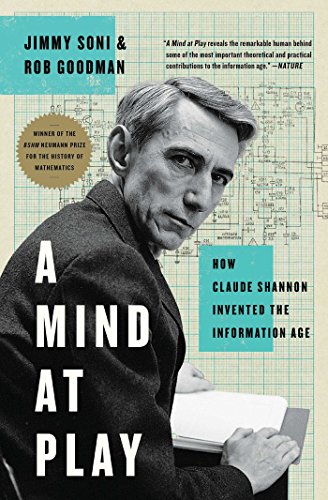 Podcasts – I have mentioned the Internet History Podcast before. It is one of the podcasts that I subscribe and listen to on a regular basis. While the podcast “CLAUDE SHANNON, FATHER OF INFORMATION THEORY” was published back on May 27, 2018, I finally just got around to listening to it today and I wanted to share it.

This episode of the Internet History podcast deals with Claude Shannon. Specifically, it is an interview with authors Jimmy Sony and Rob Goodman. They have published the biography of Claude Shannon entitled “A Mind At Play, How Claude Shannon Invented the Information Age“. During the interview, they give a brief glimpse of Shannon’s life.

Shanon was a mathematician, electrical engineer, and cryptographer. he is most noted though for being the ‘father’ of information theory. His 1948 paper “A Mathematical Theory of Communication” laid the groundwork for modern digital communications. Just as important though was his work in digital circuit design theory. His Masters Thesis at MIT demonstrated that electrical applications of Boolean algebra could construct any logical numerical relationship. This is a foundation of modern digital computers.

In information theory, the Shannon–Hartley theorem gives the maximum rate at which information can be transmitted over a communications channel of a specified bandwidth in the presence of noise. This formula, which I saw repeatedly in graduate school, is:

where (from the Wikipedia page)

If you are interested in computers, mathematics or engineering, you might want to dedicate an hour to listen to this podcast.