(See all my Book Reviews and Author Interviews) – This is the third novel by author Andy Weir https://andyweirauthor.com. Project Hail Mary was published in 2021. It is my 68th book to complete in 2022.

I received an ARC of this book through https://www.netgalley.com with the expectation of delivering a fair and honest review. Opinions expressed here are unbiased and entirely my own! I categorize this novel as G.

When High School science teacher Ryland Grace wakes up, he can’t remember who he is or why he is aboard the spacecraft. All he knows is that he has been asleep for a very long time and the other two crew members are dead.

As time passes, his memory begins to slowly return though it is very fuzzy. Slowly the Earth’s sun began to dim. The mission is the culmination of a planet-wide project to send a spacecraft and crew millions of miles in a last-ditch attempt to save humanity. The only hope is that the solution to the problem can be discovered at Tau Ceti. As Grace progresses, he encounters several problems. He is able to overcome them through his understanding of basic science.

Grace is faced with more than one life-threatening situation that he must overcome. He is shocked when his full memory finally returns, and he remembers his last few hours on Earth. As he does his research, he finds assistance and friendship from a very unexpected source. With the clock ticking on Earth’s survival, will he be able to find an answer in time to save humanity? And what will happen to him?

I enjoyed the 13.5 hours I spent reading this 482-page science fiction novel. I have been fortunate to have read all three of Mr. Weir’s novels. I have found them to be exceptional. The others that I have read are Artemis and The Martian. Grace uses a wide range of math and science to solve problems. This would make this a great novel to use in a STEM project. I like the chosen cover art. I give this novel a rating of 5 out of 5.

It is Pi Day once again . . . March 14 . . . 3/14 . . . get it? Pi Day is now celebrated on March 14th around the world. Pi or π is a mathematical constant. It is defined as the ratio of a circle’s circumference to its diameter and is widely used in mathematics, engineering, and physics. It is approximated as 3.1416, but it is an irrational number that never ends and never repeats.

The first 1000 decimal places of Pi are:

For more on Pi Day and the numerical constant Pi read What is Pi Day? Why mathematicians and bakers unite to celebrate.

Aside from making and/or eating pie, you can celebrate Pi Day in many different ways. The article “25 Best Ways to Celebrate National Pi Day” gives 25 suggestions. Celebrating Pi Day, especially if you involve pie, is a good way to encourage K-12 students in STEM. 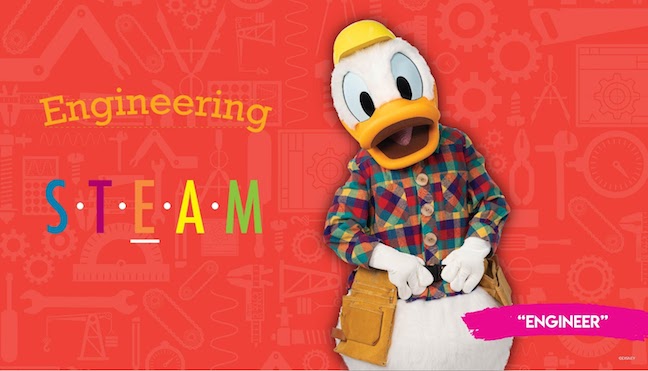 Disney is helping celebrate National STEM Day by releasing a set of FREE wallpapers for computers and mobile devices. There are five different images to choose from on the Disney website.

Today is a day to inspire kids to explore and pursue careers in science and math. I am more of the ‘old school’ and look at this just as a day to celebrate STEM (Science Technology Engineering and Math).

Take time today to expose the K-12 students in your life to STEM. Material abounds on the Internet (particularly on YouTube) and at most museums around the world.

Robots – This week, actually it started yesterday, celebrates robotics in the US. Per the National Robotics Week website:

National Robotics Week (RoboWeek) is a series of grassroots events and activities during the month of April aimed at increasing public awareness of the strength and importance of the U.S. robotics industry and of the tremendous social and cultural impact that robotics will have on the future. Activities come in all shapes and sizes from a robot block party, university open house, or a robotics competition. The mission of RoboWeek is simple — to inspire students in STEM-related fields and to share the excitement of robotics with audiences of all ages. Celebrate RoboWeek by hosting an event in your community, sponsoring or attending a local event, or spreading the word on social media.

National Robotics Week was first celebrated in 2010 after university and industry leaders appealed to the Congressional Caucus on Robotics to create a “national roadmap” for robotics technology. On March 9, 2010, the U.S. House of Representatives passed resolution H.Res. 1055, officially designating the second full week in April as National Robotics Week.

It is Pi Day today and I wanted to remind all my readers about it. I can’t really say much more than I wrote last year, so I’m just going to repeat it here.

It is time to celebrate once again that incredible number Pi or 3.14159… I had a post that included some of the history in 2016. Take a few moments today and participate in the 30th annual celebration of Pi!

This is a great opportunity to introduce kids to STEM thru Pi. They learn a little history, learn some math and it can be capped with a nice slice of yummy pie. My first choice would be cherry.

As I suggested previously, try these methods of celebration.

One of the easiest and most fun is to simply eat pie!

Wear or display the Pi symbol

And, of course, mark your calendars for next year so you can plan something in advance.

NASA is offering a way to celebrate Pi Day this year with their “Pi in the Sky” challenge.

Short Films – The short (5:27) science fiction film “Explorers” was published on YouTube in October of 2017 by DUST. The Synopsis:

A short film which shows an idealistic look at the future of space travel, seen from the perspective of those who dare to venture into the unknown.

The film was made by Rob McLellan as a tribute to the science fiction films of his youth and to those real life pioneers that inspire it. This was a solo project of his completed in six weeks (in his spare time) and produced entirely in Unreal Engine 4.

I thought that this was a very enjoyable and well done animated film. It is a film that might be of use in stimulating kids to have an interest in STEM, especially space science.

It is the second Tuesday of October and that means that it is again Ada Lovelace Day. The day has been identified (per The Guardian) to:

. . . celebrate inspirational women in science, technology, maths and engineering, in the hope that by shining a light on such people and increasing their visibility, they can inspire future generations.

Ada Lovelace Day was founded in 2009 by Suw Charman-Anderson, and part of her reason for doing this was a worry that women in tech were invisible. The idea was a positive one – rather than highlighting the problem, highlight the unseen women and shout from the rooftops about all the amazing things they’ve achieved. Ada Lovelace was an obvious choice of mascot for such an endeavour.

Take this opportunity and join in some activity to recognize the contributions of women in technology. This would also be a good time to introduce or encourage a girl you know in STEM careers.

CapMac – In Austin, our local Capital Macintosh User Group is having a special program this evening. The featured speaker will be Rhonda Childress, the only Female IBM Fellow in Austin, the CTO of Security Services, a Sr. Certified I/T Architect, and an IBM Master Inventor.

Documentary – While not available today, there will soon be a documentary series, the Chasing Grace Project, about women in Tech.

The Chasing Grace Project is a documentary series about women in tech. It includes six episodes, each focused on a different topic within the women in tech narrative. From the pay gap, online harassment and female entrepreneurship to access to the best jobs, the decision to leave or stay in tech and the role of male allies, the series illustrate how we pave the way forward. Through story we can call out the adversities women face and illustrate how they’re navigating their own paths. The result? A series of blueprints for other women to find their paths, their way.

This may be something you will want to stay aware of

The Maker Faire is happening again in Austin this weekend (May 13-14) at the Palmer Event Center. I attended the first two held in Austin, but have missed the past 6 events. I do hope to drop in this weekend.

The article “Austin Is on a Mission to Keep Maker Faire Weird” gives you a little insight to what you might see there. If you have the free time, these are great events to visit. Kids who are interested in STEM careers or just tinkering will find the event fascinating. Likewise, us older ‘kids’ who like to create new gadgets or inventions will find the event equally interesting.