(See my other Robot related posts) – We have all heard a lot about robots and automation taking jobs from humans. The article “Are Robots Coming for Our Jobs? Careful, It’s a Trick Question” tries to dispel some of those fears. It is from 2019, but the points are still valid today.

Much of that concern was generated by the paper “THE FUTURE OF EMPLOYMENT: HOW SUSCEPTIBLE ARE JOBS TO COMPUTERISATION?“. It was published in 2013 by Oxford economists Michael Osborne and Carl Benedikt Frey. In it, they claim that their research identified 47% of American jobs at risk.

Those jobs most susceptible were “insurance underwriters, telemarketers, tax preparers and sports officials“. Automation is least likely to affect jobs “requiring creative and social intelligence“. These would be “recreational therapists, mechanic and repair supervisors, and emergency management directors“. Other professions likey to avoid replacement are “dentists, dietitians, and elementary school teachers“. There will be some short-term impact but after worker skills adapt to the technology they do well. British economic historian Robert Allen calls this the “Engel’s Pause”.

Since then Frey has published the book “The Technology Trap: Capital, Labor, and Power in the Age of Automation”. In that book, he addresses the 47% claim in detail. Part of his explanation is that just because 47% can be replaced, there is no expectation that they will.

Historically the introduction of new technology has created more jobs than it has destroyed. The long term employment picture should be fine. Frey does make a couple of suggestions. Companies should provide some sort of wage insurance. Governments should also take financial measures.

Schools and universities must plan for the future. They need to prepare their students with the necessary technical knowledge. Frey suggests that worker’s attitudes will dictate how much automation will impact us. 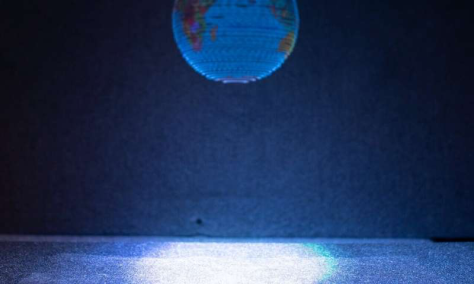 Globe created by the Multimodal Acoustic Trap Display developed at the University of Sussex. Credit: Eimontas

I thought that this was something of interest. The article “From sci-fi to science lab: Holograms you can ‘feel’” describes a holographic system called Multimodal Acoustic Trap Display (MATD) which “can simultaneously deliver visual, auditory and tactile content”. This uses “acoustophoresis” to move and manipulate particles to create the hologram.

This work was written up in the article “A volumetric display for visual, tactile and audio presentation using acoustic trapping” that appeared on11/13/19 in Nature. This could bring some very interesting interactive displays in the future.

(See my other posts on Robots & Automation ) – In the “Morning Brew” economic newsletter this morning was the following:

The Economist this week laid out just how quickly automation is taking over finance. Funds run by computers that follow human-set rules account for…

“Technological efficiencies” will lead to about 200,000 job cuts in the U.S. banking industry over the next decade, Wells Fargo said this week. And PwC found last year that about 30% of finance and insurance jobs in developed economies will be at risk of automation by 2029.

Too often we think of automation just affecting manufacturing jobs. It will affect many other sectors. This trend is inevitable in a worldwide economy. Industries have to stay economically competitive and automation will be essential to compete. Those who want to succeed in the workforce will need the right skills.

What skills are needed for the years ahead? (also from the “Morning Brew”)

(See my other Robot related posts) – Earlier this week Uber announced that their Frisco Station helipad site would be the test site for Uber Elevate. Uber Elevate is their “flying car” division. The plan, per their website, is to develop:

shared air transportation—planned for 2023—between suburbs and cities, and ultimately within cities. We’re working with our Elevate Network partners to launch fleets of small, electric VTOL (vertical takeoff and landing) aircraft in Dallas, Los Angeles, and our first international market in Melbourne.

The Frisco Station site is located on the Dallas North Tollway and is being built larger than the typical helicopter landing pad. Uber is estimating a 7 minute average flight time from the facility to their terminal at DFW.

Robots – As I have posted before, there is great debate over whether or not Automation and Robotics will cost jobs. I read “The Great Myth of the AI Skills Gap” today and it is in the camp that Automation will create rather than cost jobs. Some of the points that the article brings out:

While all that is said here makes some sense, I am concerned that the imapact of Robots and Automation will be deeper and more wide spread than prior disruptions caused by technology. While I agree that technology will create new jobs, I fear that they will be too few in number and require too much education/training to absorb those being displaced.

As with so many things the best advice is to plan for the worse and hope for the best.

You might think this is an odd report coming from Walmat, but Walmat is the largest employer in the US with 1.5 million employees. They have already taken an active role in providing employees trainging opportunities.

This report looks at more than 3,000 counties across the US, analyzing their economic, demographic, and educational attainment data. The counties are then assigned into one of eight archetypes. Each archetype has its own set of recommended actions.

Some of the findings:

If you are interested in this topic you may want to download the 44-page PDF of the  Walmart report and read it all.

The new approach to 3D printing prints the entire object using light and special synthetic resin. This new technique is much faster and has other benefits. It can only print small objects now, but there is a lot of potential.

The researchers have nicknamed the printer “the replicator”. It creates objects much like a reverse computed tomography. The object to be replicated is scanned from multiple angles. Those scans are then projected on a tube with the resin. This technique allows printing in minutes rather than the hours of a standard 3D printer.

Robots – A new report “Humans Wanted: Robots Need You” issued by staffing and recruiting firm ManpowerGroup predicts the use of robots and automation will increase the number of jobs. For this report ManpowerGroup surveyed 19,000 employers worldwide for their plans to respond to automation. The results in summary:

Based on this report the job outlook, at least in the short term, looks positive in light of increased robotics and automation.

Robots – Flying cars have been around in science fiction for many years. Now though we are on the verge of having them become part of our everyday lives. That said, don’t expect your next call for Lyft or Uber to be answered by a flying autonomous taxi.

The Boeing autonomous passenger air vehicle (PAV) shown above is just a prototype and so far it has only demonstrated the ability to take off, hover, and land. This is a 30-foot model is all electric and is designed to have a 50-mile range. Boeing NeXt is also working on a larger fully autonomous, electric cargo plane that will be able to carry up to 500 pounds.

Beyond the technical hurdles of building a flying car are the many regulatory issues that stand in their way. Needless to say, it will be a few years before we see these in our sky.

Boeing is not the only company working on flying cars. Among those interested in this market are Aston Martin, Rolls-Royce, Uber, and Toyota. These flying cars are intended to offer a transportation solution that will be able to carry passengers across urban centers where ground transportation would be slow or impractical.

Robots – I read an article about this robot that was shown at CES 2019 this morning. It is the UBTECH Walker. UBTECH Robotics is a Chinese company which has a variety of robots from hobbyist kits to real service robots. Per their website UBTECH;

Founded in 2012, UBTECH is a global leading AI and humanoid robotic company. UBTECH has successfully developed consumer humanoid robots, robots for business use, and JIMU Robot building kits following breakthroughs made in digital servos, the core part of humanoid robots. In 2018, UBTECH achieved a valuation of USD$5 billion following the single largest funding round ever for an artificial intelligence company, underscoring the company’s technological leadership.

The Walker was first demonstrated at CES 2018 and has undergone significant improvements since then. Their press release for the Walker says:

Walker is your agile smart companion—an intelligent, bipedal humanoid robot that aims to one day be an indispensable part of your family. Standing 4.75 feet (1.45 m) tall and weighing 170 lbs (77 kg), the new version of Walker is more advanced than ever, including arms and hands with the ability to grasp and manipulate objects, a refined torso with improved self-balancing, smooth and stable walking in difficult environments, and multi-modal interaction including voice, vision, and touch. Walker has 36 high-performance actuators and a full range of sensing systems that work together to insure smooth and fast walking.

UBTECH seems to have great plans for the Walker. I wonder how long it will be before we see robots in common usage as depicted in the video above? This isn’t science fiction anymore. Robots like these are coming, it is just a matter of how soon.

You can learn more about UBTECH and their plans in the article “UBTECH Shows Off Massive Upgrades to Walker Humanoid Robot” published by IEEE Spectrum.