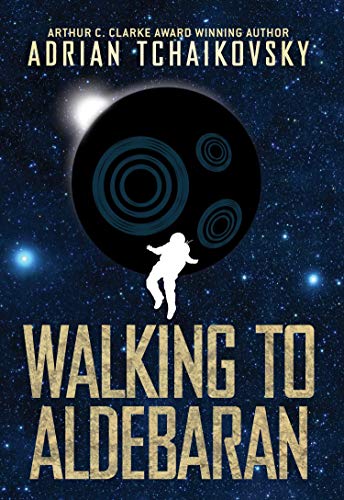 (See all of my Book Reviews) – “Walking to Aldebaran” novella was published in 2019 and was written by Adrian Tchiakovsky. He has published nearly two dozen novels or novellas.

I received an ARC of this novel through https://www.netgalley.com in return for a fair and honest review. I categorize this novel as ‘PG’ because it contains scenes of Violence. The story is set in the near future. An object has been detected at the far reaches of our solar system and an international group of astronauts is sent out to investigate.

The primary character, Gary Rendell, is part of the group to land on the object and begin its exploration. When the team is attacked Rendell flees and is lost in the labyrinth tunnel system. He must find a means of survival as he wonders the tunnels. The tunnels hold what he thinks are other explorers trapped on the object. The object seems to have many entrances and exits at many different points in space.

The time wondering alone begins to affect Rendell, then he finds the heart of the object and goes through a transformation, or at least he thinks that he does. By the time he finds his fellow humans, he has changed.

I thought that the 3 hours I spent reading this 105-page science fiction novella were interesting. I found this to be a very strange read. Had it been longer, I would probably have called a Rule of 50 and just dropped it. It mostly deals with Rendell slowly going insane. This is not one that I would recommend. The cover art is OK. I give this novella a 3.4 (rounded down to a 3) out of 5.