(See my other Food related posts) – When my wife and I were on our recent road trip we stopped at the Lone Spur Cafe for a late breakfast when visiting Durango. The Lone Spur we visited is located at 619 Main Avenue, Durango, CO 81301. There are two other locations in Flagstaff and Prescott Arizona.

Keeping with the western theme, the restaurant has a very rustic appearance, the service though was very good. 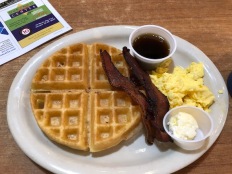 As I said, we both ordered breakfast and we were very pleased with our meals. Even though it was late in the morning the restaurant was crowded, This confirmed for me that many found the food there good. Looking at TripAdvisor this opinion for the Lone Spur is supported by a 4.5/5 rating. Likewise, it has a 4.5/5 rating on  Yelp.

The Lone Spur is open seven days a week 6:30AM to 2:30 PM, and from 5:00PM until 9:00PM on Fridays and Saturdays. They offer an extensive breakfast menu and a selection of soups, salads, burgers, sandwiches, and specialty items for lunch.

If we are in Durango again, we will definitely be revisiting the Lone Spur Cafe. It is a location I would recommend if you are visiting Durango.

(See all of my Book Reviews) – “Merlin’s Shakespeare” eBook was published in 2018 and was written by Carol Anne Douglas (https://www.carolannedouglas.com/). This is Ms. Douglas’ fifth publication and the first in her ‘Merlin’s Shakespeare’ series.

I received an ARC of this novel through https://www.netgalley.com in return for a fair and honest review. I categorize this novel as ‘G’. The story is set in both contemporary times and in Shakespeare’s England. The primary character is 15-year-old Beth Owens.

Owens is a theater student, particularly interested in the works of Shakespeare. Merlin appears to her and sends her back in time to Shakespeare’s England. She meets various characters from Shakespeare’s plays some of whom she likes and others which frighten her. Merlin has sent her back to search for a missing Shakespeare play about King Arthur. Along her way she begins to find that she has some magical powers of her own.

I thought that the 8.25 hours I spent reading this 358-page young adult fantasy were interesting. The plot is pretty simple and the characters are not the deepest, but it seems targeted at the very young adult sector. I like the chosen cover art. I give this novel a 3.6 (rounded up to a 4) out of 5.

(See my other Food posts) – We have dined at Casa Garcia’s Mexican restaurant twice now. While they have six locations, we have only been to the one at 15803 Windermere Drive, Pflugerville, Texas 78660.

We have enjoyed sharing the mixed fajitas plate on both of our visits. The restaurant has been crowded on each occasion, so it seems to be very popular. The food, I believe, is above average for most Mexican restaurants. Unsurprising, Yelp gives them 3.5/5 as does TripAdvisor. I am sure we will be going back again.

If you are hungry and in the Pflugerville area, you might want to give them a try.

(See my other WWII related posts) – I recently watched the movie “Mission of Honor” (originally named Hurricane) on Netflix. This is a modern WWII era film that gives a fictionalized version of the RAF 303 squadron in the Battle of Brittain. The 01:47:00 film was released in March of 2019. The synopsis from IMDB:

The exploits of 303 Squadron RAF during the Battle of Britain. The squadron consisted of Polish pilots, many of whom were veterans of the air battles involved in Germany’s invasion of Poland.

This is more romance set against the backdrop of WWII than it is a war movie. It was enjoyable enough, but not what I would consider an outstanding film. That also seems the consensus on IMDB as there it is only rated 5.9/10. It did receive and 83% on Rotten Tomatoes. While most of the dialog was in English, there was a substantial portion in Polish and some in German. Those were supplemented with English subtitles.

(See my other WWII and Music related posts) – the song “G.I. Jive” came late in the war years. It was written and first performed by Johnny Mercer in 1944. His version reached #1 on the Harlem Hit Parade for one week and then peaked at #13 on the pop charts. A few months later the version sung by Louis Jordan made it to #1 on both the Harlem Hit Parade and the pop chart.

(See all of my Book Reviews) – “The Great Desert Escape: How the Flight of 25 German Prisoners of War Sparked One of the Largest Manhunts in American History” eBook was published in 2019 and was written by Keith Warren Lloyd (https://keithwarrenlloyd.com). This is Mr. Lloyd’s first published book.

I received an ARC of this novel through https://www.netgalley.com in return for a fair and honest review. I categorize this novel as ‘G’. The story is set in 1944.

Some captured German military personnel were being held in prisoner of war camps in the US. One of those camps was at Papago Park just outside of Phoenix, AZ. Several of the prisoners worked for months to dig a tunnel 6 feet deep and 178 feet long. The tunnel was finished in December 1944 and 25 prisoners escaped into the Arizona desert.

The story of those who escaped is told as well as that of those hunting for them.

I enjoyed the 5.5 hours I spent reading this 288-page history. I had read before of German POWs being held in the US, but this is the first account I have read giving more details. I thought that this book gave an interesting view of life in the German POW camp and a glimpse of the ‘home front’. It read well for a non-fiction book. I like the selected cover art. I give this novel a 4 out of 5.

(See my other Robot related posts) – Ford Motors announced today that it will begin testing its self-driving autos in Austin. Austin will be one of three (Washington, D.C., and Miami are the other two) locations where their cars will be tested.

(See my other Robot  related posts) – Boston Dynamics released another video showing more skills, this time more into the gymnastic variety. Per the Boston Dynamics’ website, Atlas is comprised of the world’s most compact hydraulic systems including custom motors, valves and a hydraulic power unit that drive its 28 hydraulic joints. The robot stands 1.5 meters tall (4.9 feet), weighs 80kg (176lbs) and moves at 1.5 meters per second (3.35mph).

The robots have come a long way since the DARPA contest a few years ago where many were falling when simply trying to walk.

(See my other Music related posts) – I came across this 09:11 instrumental “James Bond Medley” on YouTube this morning and wanted to share it. The video was uploaded to YouTube in September of 2011 by fschnell. It is performed by the Berlin Film Orchestra.

I enjoyed this compellation of music from the Bond films.

(See my other 2019 Road Trip and Location posts) – Since we were driving through northern Arizona, we wanted to take the time and visit the Four Corners Monument. It is the only location in the US where four states intersect. As it turned out we barely made it there in time before it closed for the day. Fortunately, we arrived just before it closed and we had a chance to look around.

The large plaza with the actual point where the corners of the four states Arizona, New Mexico, Utah, and Colorado meet was almost empty. I think if we had arrived earlier and been there on a weekend or in the summer when schools were out, it would have much more crowded. As it turned out we could take photos easily and without intrusions by others. We even were able to get a photo of us standing at the intersection point. 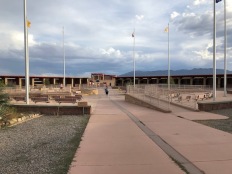 There is a great deal of booth space around the periphery of the plaza, but none were occupied when we were there. We want to visit on a future trip when more is going on at the Monument. As you can see from the flags in the photo above, the wind was blowing strongly while we were there.

In 1912, when the dust settled and the final lines were drawn, a cement pad was built on-site to officially mark the spot where the states came together. The cement pad has since been upgraded to a brass and granite designation marking the “four corners.”

Located within the Colorado Plateau, the site is near many parks and preserves renowned for their natural beauty, including Monument Valley and Canyon de Chelly National Monument.

I wouldn’t make a trip just to visit Four Corners, but if you are close to that part of the US it is a nice side trip. There is a charge of $10 per individual or $20 per vehicle to enter the Monument.