(Andreas Economou in Florence, Italy with the Duomo and its Campanile (bell tower) behind him)

(See the other Author Interviews on my Blog) – I read Andreas Economou’s novel “Templar Secrets” a few weeks ago and, after posting my review, I asked the author for an interview.

Myself: When did you first realize that you wanted to become a writer?

Economou: After working in a bank for almost 3 decades, I realized the dreaded futility of it all. It started to feel that what I’d been doing all those years would never endure the ravages of time. Heck, it wouldn’t survive the next fiscal quarter! So, I had to get out. I needed the world to hear my voice and thoughts in a meaningful way. I had to write.

Myself: What is the first piece that you remember writing?

Economou: My first attempt at writing was at the age of 12. I wrote a detective “novel,” based on my favorite TV show at the time. And I remember being quite proud of my achievement. The end result? A full 12 pages—front and back! Then, puberty set in and everything went haywire. My creative juices found other, non-writing, stuff much more appealing. Unfortunately, it took too many years for that situation to sort itself out.

Myself: What part of the world do you currently live in? Has it affected your writing?

Economou: I live in Cyprus, an island on the easternmost shores of the Mediterranean, just south of Turkey and northwest of Israel. It’s an island rich in history, going all the back to 7,000 BCE (according to one of the earliest human settlements discovered on it). In fact, the village of Khirokitia, where this settlement was found, has an even more fascinating link to world history: it was also the site of one the strongholds the Knights Templar had on Cyprus. Contrary to what you’ll hear in most documentaries these days after the Holy Land was irrevocably lost in the 13th century, the Templars didn’t return en masse to Europe. They set up their next (and last) headquarters in Cyprus.
This, along with my 22-year membership in a Greek-speaking Masonic Lodge, and the fact that Larnaca (the city I grew up and live in) was the island’s major Phoenician colony in antiquity, gave me all the inspiration I needed to write “Templar Secrets.”

Myself: What’s the earliest book you remember reading for yourself?

Economou: As a prepubescent, I must have read Charles Dickens’ “Oliver Twist” about a dozen times. Yet, every time I did, the injustices that boy suffered always brought tears to my eyes.

Myself: What book that you read as a child stands out in your memory?

Economou: That would be Jules Verne’s “Mysterious Island.” When I read it at age 13, in the summer just before starting high school, it cultivated all sorts of subjects in my mind: the power of human creativity and resourcefulness; how important science is to our lives; and, that anything seemingly mysterious usually has an explainable cause behind it (to name but a few).

Myself: I too read Jules Verne at about that same age. I am still amazed at the science fiction he produced. What is your favorite genre? book? character? author?

Economou: Besides Jules Verne, the one whom I’ve read the most is Isaac Asimov. There was a time when I used to “gobble up” his “Foundation” and “Robot” series. Then, after a phase of non-fiction, evolution-centered books, I moved on into Historical Fiction. And by that, I don’t mean the books with the naked, six-pack hunks on their covers. (If you don’t believe me try searching for “middle ages historical fiction” in Amazon’s Kindle Store. You’ll be amazed at how many there are! Those are just period romance novels, which were never my cup of tea.) No, the ones I mean are by the likes of Umberto Eco, Ken Follett, Bernard Cornwell, Alexandre Dumas, and (yes) Charles Dickens.

Myself: I have read much of Asimov, Follet, and Dumas as well. How did you pick the genres for your stories? Where do your story ideas come from?

Economou: I don’t think my first book, “First Adam,” (an apropos title) fits into any standard genre category. If there were such categories as, “Prehistoric Fiction,” or “Bible Tweaking,” it might fit into those. You see, influenced by all the books I read on Human Evolution, I wanted to tell the story of how the earliest man (Homo sapiens) might have emerged into our world. So, using the Adam & Eve story from the Bible as a loose basis, I devised a story parallel to it, but in Africa 200,000 years before our time.

When that was out of the way, and self-published, I pondered whether to write something within the Science Fiction genre, one of my favorites. But, alas, my knowledge of science isn’t very extensive, so instead of writing a subpar book, I decided to focus on Historical Fiction (the real one) instead. “Templar Secrets,” my second novel, spans almost 3 millennia, starting from the 10th Century BCE, it passes through the Middle Ages and winds itself all the way up to modern times.

Myself: Do you work to an outline or plot or do you prefer just to see where an idea takes you?

Economou: You know, that’s a great question because I must say in my experience it’s a bit of both. I start out with a rough outline, but there’s always something missing. For example, in “First Adam,” I had an idea of what the ending might be, but the journey leading up to that eluded me. It just sorted itself out along the way. And in “Templar Secrets” the stories of the various characters and classes of characters were carefully plotted out, but the ending was nowhere in sight. At the opportune moment though, it also turned up by itself. So, I’ve found that a story, more often than not, has a life and a will of its own.

Myself: How much research do you put into a novel?

Economou: I do extensive, some might say exhaustive, research. And I do so because on matters of authenticity I will suffer no discrepancy. I’ve read too many books and seen too many movies, the facts of which can be debunked by a simple visit to Wikipedia. In writing Historical Fiction my motto is: “The facts of history are sacred.” That said, every period has its gray areas, its missing pieces. And every historical period has its little unresolved mysteries, especially during the Middle Ages in Europe. So, what better than to keep the undisputed historical facts true, while also fusing them with answers to longstanding mysteries without the fear of contradiction? 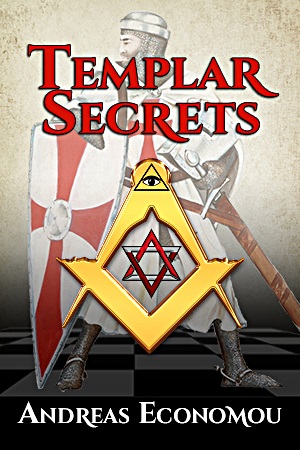 In “Templar Secrets” I strived to do just that, blending history with “solutions” to many historical question marks. For instance:

All these (and many more) historical “blind spots” are addressed.

Myself: What advice would you give to an aspiring author?

Economou: With only 2 books under my belt, so far, I can hardly be called an author myself. To be considered one, I’ve been told you have to have written at least 4. So, I’m not the right person to ask for advice on writing. However, as in all other walks of life and professions, diligence, persistence, and dedication are always necessary qualities.

Myself: What novels/works have you published?

Economou: As I already stated, I’ve written 2 novels so far, both of which have been self-published. Unfortunately, it proved impossible to find a literary agent or publisher willing to take on an unknown writer from Cyprus.

“First Adam: The Father of Us All” introduces the first modern man, and his quest to find his real parents, in Africa 200.000 years ago.

My second attempt was a little closer to home, and it put into effect what authors are frequently advised to do: “Write about what you know.” For 22 years, I used to be a Freemason. So, using that experience, I decided to write about how this ancient institution came into being. “Templar Secrets” starts from when the Temple of Solomon was built in Jerusalem. Then, it looks into how the Knights Templar got started in the Middle Ages, and why they gradually morphed into the Freemasons. Finally, a young, new Mason in modern-day Cyprus tries to unravel all these events after his initiation.

Myself: What are you currently working on?

Economou: At the moment I’m working on a book about the most illustrious King of Cyprus, Peter I. His story will have ties to the Secret Society I introduced in “Templar Secrets.”

Economou: As ever, I dedicate all my work to my sons, Marcos and Achilleas. I just hope it makes them as proud of me as I am of them.

Myself: How should your fans follow you or get in touch?

And, I’ll deeply appreciate if you could follow my Amazon Author page: https://www.amazon.com/Andreas-Economou/e/B014AAMJU4