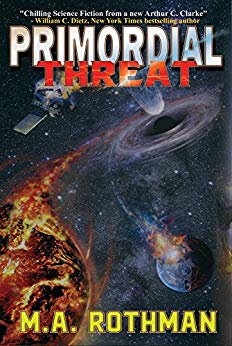 Book Reviews – “Primordial Threat” eBook was published in 2018 and was written by M. A. Rothman (http://www.michaelarothman.com/). Mr. Rothman has published two novels.

I received an ARC of this novel through https://www.netgalley.com in return for a fair and honest review. I categorize this novel as ‘PG’ because it contains scenes of Violence and Mature Language. The story is set on Earth in 2066. While there are several characters followed, the primary character is the brilliant scientist Dave Holmes.

Earth has advanced with commercial space efforts as well as scientific research throughout the Solar System. Burt Radcliffe has just been appointed as the new head of NASA’s Near Earth Object program when an Earth-shattering discovery is made – a black hole is headed towards Earth. Earth has DefenseNet, a ring of satellites to repel killer asteroids, but they will provide little protection from the black hole.

An urgent search is begun for options. Before he was ousted in disgrace as head of the International Science Foundation, Dave Holmes had instigated several programs, including DefenseNet. What was viewed as wasteful spending then, seems to the groundwork to save the Earth from a disaster like the approaching black hole. Can Holmes be found? Will he, can he, lead the way to save Earth?

While the scientific community around the world works on measures to save the Earth, there is a growing and powerful segment of the population that wants to stop them. Their view is that the black hole signals the foretold ‘End of Days’. They see any effort to evade the black hole as sacrilege.  Only if humanity lets the end come, will they be saved. The group is willing to go to any length to stop the efforts to save the planet.

I thoroughly enjoyed the 10 hours I spent reading this 461-page science fiction thriller. I like the overall plot. I also liked the characters created for the novel. However, both seemed a little weak. The cover art is OK, but I think a better image could have been chosen. I give this novel a 4.4 (rounded down to a 4) out of 5.