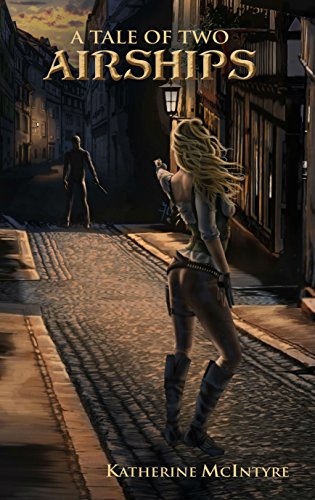 “A Tale of Two Airships” eBook was published in 2016 and was written by Katherine McIntyre (https://katherine-mcintyre.com). Ms. McIntyre has published a dozen novels. This is the second in her “Take to the Skies” series.

I purchased this novel after receiving the first in the series as an ARC for review. I categorize this novel as ‘R’ because it contains scenes of Violence, Mature Language and Mature Situations. The story is set in the near future on Earth, but that Earth is a world powered by steam. The primary character is Captain Beatrice Weston of the airship Desire.

More than two years have passed since the escapades described in the first bool “An Airship Named Desire”. The Desire and her crew are just making ends meet. Longtime crew member Isabella is contacted by her estranged gypsy clan, recruiting the Desire for a job. But while Weston and a small group of her crew meet with the gypsies, the Desire is taken along with the rest of the crew.

Weston must find a way to get her ship back and rescue the crew. Much more happened but more detail would give up spoilers.

I thoroughly enjoyed the 8 hours I spent reading this 277 page Steampunk Fantasy. There is near non-stop action as Weston and her band find themselves in one tight situation after another. There is not a happy ending for all as the Desire looses some of its crew. I thought that this was a fun read. There has still been no explanation as to what happed. Yet this is an Earth evolved from ours as Weston mentions radar once, the automatic rifles used are AK 551’s which evolved from the AK-47 and aether, the substance that powers the steam engines, only begun to be harvested a few years earlier. The cover art certainly gives the feel for the story. I give this novel a 4.5 (rounded up to a 5) out of 5.