While this certainly has aspects of Science Fiction (the main character, 16 year-old Asa Butterfield was born on Mars and grew up there) it is mostly a teen coming of age romance.

This standard plot is complicated in this case by Asa’s mother being one of the first colonists sent to Mars. The fact that she is pregnant is not discovered until after the mission has launched (I think that this is a highly unlikely possibility). She then dies in child birth without revealing who the father was.

NASA has kept Asa’s existence a secret (hard to believe). Now at 16 Asa has only met the 14  other Mars colonists. He meets a girl, Tulsa, on-line (unrealistic conversations – unless they have discovered faster than light communications, exchanges would experience a lot of lag due the distance – from 3 up to 21 minutes [1]) and wants to go to Earth to meet her in person and find his father.

So this might be an entertaining movie, but I don’t think I would pay to go see it. I have a hard time with SciFi movies that simply ignore physics. We will all know how it is received when it opens December 16, 2016.

“Lost to the Shadows” eBook was published in 2016 and was written by Brandon Jett (http://brandonjett.com). This is Mr. Jett’s first novel.

I received a galley of this novel for review through https://www.netgalley.com. I categorize this novel as ‘R’ because it contains scenes of Violence, Mature Language and Mature Situations. The story is set in unidentified medium size town in the US. The primary character is 17 year-old Drake.

Drake and 16 year-old Rue are both orphans and have grown up at Saint Helens Orphanage. These two are also trained and experienced killers. The Fathers at Saint Helens have trained them well over the years and sent them on many missions to kill in the name of God.

Now a group of professional assassins have come to town and they are focusing on a laboratory that is about to demonstrate a new alternative fuel. Drake, Rue and the Fathers begin to intercept and kill the assassins.

This brings Saint Helens to their attention. Drake wants to try and save everyone, but he must learn to prioritize. Soon it becomes a life and death struggle with the assassins. He has to learn to make sacrifices to save those most important to him.

This was an interesting 6.5 hour read of 276 pages. There was a lot of bloody action so it was a fast paced book. Drake is a hard character to like. On one side he is the typical teenage boy with a crush on one of the girls at the Orphanage. His darker side though includes several murders, mostly of bad people, but not always. I want to say that this is a Young Adult Thriller, but the plot includes some pretty rough scenes. There are scenes with Drakes girlfriend, Meryl, using magic that I don’t understand. Is she just interested in the occult or is there supposed to be something to it? It is not explained. The cover is appropriate as Drake is rarely without a knife. I give this novel a 3.4 (rounded down to a 3) out of 5. 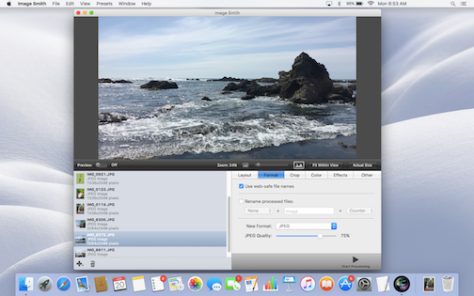 Product Announcement – 128bit Technologies of San Francisco, California has released Image Smith 2.3, a handy batch processing app for images that can quickly process a single image, or a huge number of images. This saves a massive amount of time when working on large image projects!

Process a ton of images all at once! Tired of wasting countless hours converting and editing your pictures? Editing a large number of images is a time consuming, mind numbing repetitive process if you don’t have an application like Image Smith to do it for you – in a fraction of the time!

Create smaller, web-friendly copies:
Use the pre-defined presets in Image Smith to scale or stretch images down to formats suitable for web banners, e-mailing photos, creating backups, and more! This is ideal for taking large photos from your camera (which are typically greater than five megabytes each these days!) and scaling and converting them down to a manageable size of only a few hundred kilobytes for easy image management.

Professional image manipulation:
Many power-user features are also included: changing the color levels, applying a sepia effect, inverting, changing the contrast, auto-leveling, extracting image masks, and rotating by angle. You can also instantly preview the effect of each setting before processing the entire set.

“The Templar Archive” eBook was published in 2016 (September) and was written by James Becker (http://www.james-becker.com/  a terrible web site as it requires Flash to operate). Mr. Becker has published 11 novels.

I received a galley of this novel for review through https://www.netgalley.com. I categorize this novel as ‘PG’ because it contains scenes of Violence. The story is mostly set in France and Switzerland. The primary characters are antiquarian bookseller Robin Jessop and computer expert David Mallory.

This is the second volume of the “Lost Treasure of the Templars” series and picks up a short time after that novel ends. Using clues discovered in the first book, Jessop and Mallory travel to France to pursue their findings. What they find in Notre Dame Cathedral sends them to Switzerland.

Following them are members of the Dominican Order from whom they barely escaped from in the first book of the series. Not only are they faced with these killers, but another group has become interested in them as well.

The problem solving skills of Jessop and Mallory are stretched by the puzzles they are faced with. They must also avoid the Dominicans sent to kill them.

This was an enjoyable 7+ hour read of this 478 page Thriller. This was not the best book of the problem solving adventure genre that I have read, but it was decent. I think that one problem that I had was that most of the villains were not very evil. The author did keep the pace moving along well. The cover is OK though I am not sure what aspect of the story it is supposed to convey since Jessop and Mallory were in caves not stone tunnels. I give this novel a 7 (rounded up to a 4) out of 5. 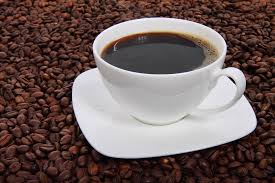 Today, September 29, 2016 is National Coffee Day in the US. This is part of a world wide celebration of coffee on or around this date, though most countries choose the 29th. I like my coffee so this day will rank up there with Pi Day and Star Wars Day in my calendar from now on.

I have had my normal two cups (merely 16 oz each) but I may have more in recognition of this special day. We have certainly come a long way in the development of coffee from its mid 15th century discovery.

Many of your local coffee houses will be celebrating this day one way or another. Here is a list of some of the deals you may be able to participate in.

You may also want to visit this video for some tips on brewing that perfect cup of coffee. 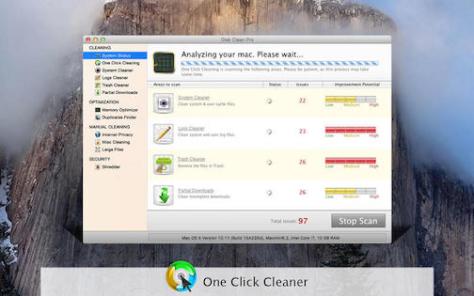 Product Announcement – Systweak Software of Jaipur, India has released Disk Clean Pro 1.8 for macOS. The app is a performance boosting app for Mac that has been developed by Systweak Software. It is now the top selling app on the Mac App Store. A comparatively new entrant in the utility apps category, Disk Clean Pro has received consistent reviews from users ever since its launch late last year.

Disk Clean Pro is a multi-pronged app that helps in improving Mac speed and overall performance. There are 4 essential cleaning features viz. cache files, log files, trash files, and partly downloaded files. The app automatically spots such files and clears them out to free up storage space. In addition, it also has a memory optimization feature.

Disk Clean Pro 1.8 is just $0.99 USD (or an equivalent amount in other currencies), and is available worldwide exclusively through the Mac App Store in the Utilities category.

This may be one of the Apps you choose to begin your Mac TuneUp efforts.

A new trailer is out for “Fantastic Beasts and Where to Find them“. The movie scheduled to open November 18 looks even better than the first trailers indicated.

I am looking forward to this next chapter of J.K. Rawling’s world of magic.

Musk in his presentation also stressed that this effort was not without risk. He emphasized that the first group headed to Mars would likely fatal accidents.

Only time will tell whether or not SpaceX will be able to fulfill these goals. They have been remarkably on track since their creation in 2002. Regardless of their success, the efforts that SpaceX is undertaking will move commercial space operations forward.

It was announced yesterday (9/27/16) that the September issue of Linux Journal would be free for a limited time (it was working at about 09:20 CDT). You can download the PDF file here.

I have written quite a bit about AI over the past few months. I came across the article “This AI-written pop song is almost certainly a dire warning for humanity” today and found it interesting. Certainly I am no music expert or even listen to music very often (I put on a local popular radio station when I am driving granddaughters around), but the tune in the video below is not bad.

Now as the article explains, the AI just creates the melodies and a real human composer takes that and turns it into the final music track. The melodies were produced by Sony’s Flow Machines.

The AI pulls data from about 13000 songs in its leadsheet database when a user inputs the selected style for the music to be created. The example above was created in the “Beattles” style.

Is this a sign of another career sector that will be impacted by AI in the years ahead? It is too early to tell, but Sony plans to release a music album of AI created pop music in 2017. If it is successful who knows what the long term impact may be.