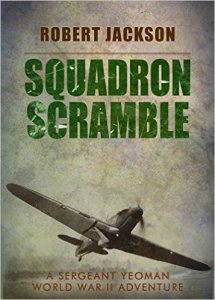 “Squadron Scramble” eBook was published in 2015 and was written by Robert Jackson. Mr. Jackson has written several books, both Fiction and Non-Fiction, on World War II, with a focus on aircraft of the era.

I received a galley of this novel for review through https://www.netgalley.com. I categorize this novel as ‘PG’ because of Violence. This Fiction novel is set in the early days of World War II. It covers the ‘Battle of Britain’ (https://en.wikipedia.org/wiki/Battle_of_Britain) that lasted from late July 1940 through October of that year.

Those months saw an aggressive air power battle between the British and Germans in the sky over Britain. This story follows Sergeant George Yeoman of the British RAF and Lieutenant Joachim Richter of the German Luftwaffe. Yeoman and Richter combat one another more than once in the sky.

I thought that this story paints a good picture of the stress both sides were under during the Battle for Britain. Pilots and those interested in that era of flying will enjoy the many details that the author has included. I have read many stories from World War II, both Fiction and Non-Fiction. This book is short (119 pages and about 6 hours of reading), but I enjoyed it. I give this novel a 4 out of 5.